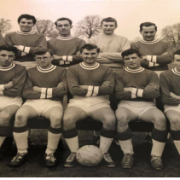 Over the last few weeks people have been uploading wonderful old photos to do with the village on the Bildeston Facebook Noticeboard. Musical bands from previous centuries and sports teams
who proudly represented the village, like the Bildeston Rangers football team of the 1960s shown here.

My good friend, Roy Halls, always told me he was a decent footballer in his prime, and here is the evidence! Now, of course, a decent lawn bowler too! What memories they stir for those
involved, and what pride they conjure up too. It was one among many successful teams, stretching back in time, and it is great to know Bildeston Rangers is still going strong, successful and representing the village across the county.

Lynda Ann Seager has been posting fantastic old photographs from early in the 20th Century on the Bildeston Noticeboard. Like the team photo of 1922/23, and a moment captured of a competition where they all dressed up in different costumes. They are a treasure trove of historical documents charting people, events and our way of life all those years ago. How many of us knew they even existed? Poignant too, are the comments of Bildeston families who recognise their family and friends from all those years ago.

Thinking of July might stir up other memories from those who were around at that time, because it was this month, July in 1966, that England won the Jules Rimet Trophy, the world cup, beating Germany 4-2 after extra time. It was the 30th July in fact, a date that still thrills British football fans and gets them excited each time a major international competition comes around. Optimism rises again and the media whip up excitement, national fervour and hope that the feat of 1966 can be repeated by our national team. The team records a new song, some much better than others, and we get out our flags and hang them on windows and cars. Then we cope with the disappointment!

But that’s the national team, no such disappointment for our own teams. Across the sports that can be enjoyed in Bildeston, players must be champing at the bit to get back out there. Slowly, those involved in our sports clubs are managing the gradual easing of the lockdown. At just the right time to coincide with us needing to know what is going on, the Parish Council deliver our new, updated village website. Fiona Lemon, appointed by the Parish Council to oversee the project, explains all on Page 17. Fiona and Councillor Leigh-Hunt have done a marvellous job, but it is not finished. There is a space on the site for residents to contact her with suggestions on what can be included and is also training those who need regular access to upload items for themselves. It marks a new moment in the life of Bildeston village, building on the previous website which was already the gateway for anyone on the internet seeking information about our special village in Suffolk. And it is special, just read the story on page 9 if you want more proof