You are here: Home / About / History

In the fields surrounding the village of Bildeston, a small number of Stone-Age flint tools have been found that show early hunter-gatherers came through this part of the Brett Valley.

People of the Iron Age have also passed this way. Two Roman roads crossed here so it is not surprising that Roman coins as well as scatters of debris from building and metal working have also been discovered.

Bildeston is one of sixteen place names in Suffolk that has a Danish personal name compounded with Anglo-Saxon tun. This indicates that Angles established a farming community here sometime in the sixth century and after East Anglia was settled by Danish soldiers as part of the Danelaw, a leader Bildr took over about the year 880. The oldest extant written record of Bildeston is in the Domesday Book of 1086. 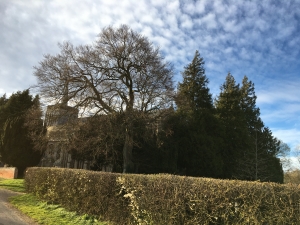 The original settlement was on the hilltop site where the oldest building in the parish still stands, the medieval church dedicated to St Mary – St Mary Magdalene since 1900 – which overlays stone and timber predecessors.

In 1975, when the fourteenth-century tower suffered a partial collapse, many pieces of limestone with oblique Norman tooling-marks were found amongst the rubble, which suggests re-use from a twelfth-century building.

Bildeston has been identified as among the nine county churches that exhibit the hand of master-mason Hawes of Occold, whose work creating the fifteenth-century nave arcades was probably financed by wealth generated from the woollen-cloth industry that flourished here. Read more about the original settlement here. (coming soon)

Lords of the manor

In 1066, Edith, queen consort to Edward the Confessor (reign 1042-1066), was lord of the manor. During the Middle Ages, the manor was held by four absentee families – de Hastings, de Loveyne, Bourchier and Devereux – all linked by blood or marriage.

In 1264, Matthew de Loveyne obtained a market charter and laid out a trading area in the valley abutting the main highway running through the parish. Slowly the population re-located to this new position, eventually leaving the hilltop deserted except for the parish church and manor house. Read more.

As the new settlement developed, a large part of the market place was infilled by buildings that created two parallel lanes now called Duke Street and Chapel Street. The new market town of Bildeston became home to people involved in making woollen cloth, both clothiers who ran this domestic industry as well as their workers: their fifteenth-century timber-framed houses and workshops can still be seen. With the church some distance away, a late 14th century chapel-of-ease dedicated to St Leonard served the population especially during winter months.

Towards the end of the sixteenth century, a general increase in population coincided with a decline in the cloth industry and caused considerable unemployment and underemployment. Weaving in Bildeston was gradually superseded by wool combing and other yarn preparation for weavers elsewhere. Read more.

The farming landscape of this part of Suffolk was made up of arable fields with a smaller proportion of pasture and meadow, all enclosed by large hedges that supported a mixed husbandry of cereal growing and cattle rearing for dairying.

In 1595, to assist in alleviating poverty, wealthy clothier John Brownsmith bequesthed property in Chapel Street for use as an elementary school and alms house. Find out more about the school in ‘Retail, community and school’ below.

By 1674, two-thirds of householders were exempt from taxation owing to poverty. Although other small charities had been founded to support the poor, two years later, a workhouse with capacity for thirty was opened in Chapel Street, where inmates were taught to spin.

In 1779, when Bildeston joined Cosford Incorporation, the parish workhouse was closed and inmates were transferred to Cosford workhouse in Semer.

During the medieval period, markets were major places of sale and purchase. Suffolk’s two largest towns Bury St Edmunds and Ipswich held markets on most days. Smaller centres, with markets held weekly, still had an intermingling of urban and rural owing to close contact with farming activities of their surrounding countryside.

For exactly one hundred years from 1604, four generations of the Revett family were manorial lords and residents at Bildeston Hall by the parish church. Bildeston became a centre for surrounding villages.

The weekly Wednesday market and two annual fairs specialising in toys and clothing attracted customers, who also patronised craft workshops supplying goods and services, a growing number of retail shops, four public houses and a succession of physicians. Although a small urban community, Bildeston had a rural atmosphere as intermingled in its crowded narrow streets were five large farmhouses.

In 1713, two houses in Duke Street were licensed for dissenting services. Disused St Leonard’s in Chapel Street was demolished to avoid non-conformist use so in 1731, a chapel was build in Duke Street. A congregation of Particular Baptists was constituted six years later and in 1844, the present brick-built church was erected. For just over a century from 1885, a Salvation Army Corps met in High Street.

The last resident lord of the manor died in 1724 and the new lords – living at Polstead Hall – closed the market in 1778. As a trading centre, Bildeston’s fate was sealed and the declining town was described as being meanly built with dirty streets.

The fairs continued and from time to time hiring fairs for domestic and farm servants were also held here. During the mid-nineteenth century, an unofficial weekly cattle market was established for a while behind the Crown Inn. However, by 872, the last official fair had dwindled down to one stall, since when it has not been held.

In 1785, there were plans to link London with King’s Lynn by a waterway, which included a stretch of canal through Bildeston: nothing progressed from the drawing board.

On four occasions in the nineteenth century, different railway routes were proposed for this valley, which would have revolutionised transport in the area and transformed the economics of farming and local industries of matting, malting and brewing. Again, none of these proposals came to anything.

In 1804, Richard Wilson (1759-1834), wealthy solicitor and MP for Ipswich, started buying real estate around his newly-acquired home in Bildeston, eventually owning half the parish.

To create a landscaped park, he demolished houses in the lane leading up to the parish church and erected a brick and flint wall around his property, much of which is still evident particularly in High Street. He also established a famous horse-breeding stud here with William IV (reign 1831-1837) as one of his many illustrious clients.

After 1840, Bildeston flourished again and several retail shops were set up in their proprietors’ homes: some houses still have large front windows where goods for sale were were displayed.

There were also community projects. In 1844, principal farmers of Bildeston and surrounding parishes purchased a fire engine, which was maintained by public subscription and manned by local men until 1936.

For many year’s Bildeston’s timepiece had been on the former workhouse but in 1864, the building was sold and together with public subscriptions, the Clock Tower was built in Market Place.

The subscribing public also paid for street lighting and maintenance of the National School set up between Chapel Street and Duke Street in 1853 by Revd Joseph Gedge (rector 1849-1879), which accommodated one hundred pupils. This remained the village school until 1968, when a new primary in Newberry Road was provided by West Suffolk County Council.

Employment for the many was as a farm labourer, shop assistant or live-in servant.

From 1867 to 1885, a coconut-fibre (coir) mat and matting factory factory ran in High Street and in 1873, Squirrel’s Mill was established, which continued working until 1991.

Several organisations were based in the village, the most successful being Bildeston and District Horticultural Society founded in 1866, which held seasonal events each year including Bildeston Show at Danford Park until 1955. In 1877, athletic sports were introduced to the programme, which were so well-organised that they gained recognition from the Amateur Athletic Association.

At the end of the century, ten acres (4.04 hectares) of garden allotments were provided for labouring families at the north end of town, while local charities still provided clothing and fuel for the poor.

During World War I (1914-1918), seventeen men from Bildeston were killed while in the armed forces or later died of their wounds. Returning servicemen formed the Brotherhool and in 1923, erected a snooker hall and social club in Duke Street, which was taken over in 1975 as Bildeston’s village hall.

The snooker hall and social club erected in Duke Street by returning servicemen was superseded in 1995, when Chamberlin Hall was built, mostly financed by the generous gift of villager Kate Chamberlin. 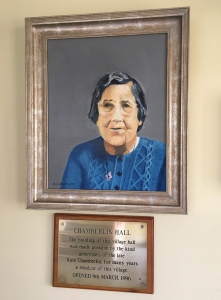 Bildeston and District Horticultural Society held the Bildeston Show at Danford Park until 1955. Athletics sports were added to the programme from 1877 and in 1921, Danford Park became the permanent ground for Bildeston Rovers Football Club.

The field continued as the village sports ground until 1971, when it was put to arable. Until 1974, earthworks near the parish church indicated the manor-house moat, former streets and house platforms of the deserted medieval village, which were destroyed by ploughing.

In 1924, the first telephone call was received in the village and 1935 saw provision of mains water.

Four names from World War II (1939-1945) were placed on the war memorial in Market Place and for four years during that period, 79 men and one woman from Bildeston and Wattisham served as No.1 Platoon A Company 10th Battalion of Suffolk Home Guard.

Between 1951 and 1994, the Royal Navy commissioned 119 ton-class minesweepers of which HMS Bildeston was one of the first, serving 33 years before being decommissioned in 1986. Its ensign and bell are laid up in the parish church. 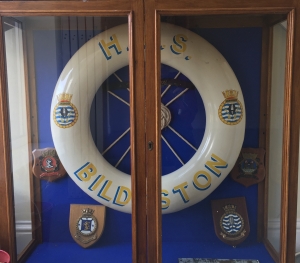 In 1988, Taylor-Made Joinery, a leading bespoke specialist founded by a Bildeston resident, was one of the first initiatives under a new county-planning policy to create rural employment by allowing buildings on open country, which resemble a farm complex in traditional materials.

Since 1921, small housing estates have been built around the edges of the main settlement, making today’s population just over one thousand residents, served by a health centre, a primary school, three public houses and a grocery shop and post office.

As well as a magnificent village hall, there is a sports field with tennis courts, two children’s playgrounds and a pocket park for nature lovers. The free BNatural music festival is held annually in September.

Bildeston has never given birth to anyone particularly famous or for  a long time been residence to the well-known.

William Dowsing (1596-1688), an iconoclast at the time of the Civil War, was married here in 1649 to the widowed daughter of a Bildeston doctor.

While on a visit to his friend Richard Wilson, Captain Edward Rotheram (1753-1830), commander of HMS Royal Sovereign at the Battle of Trafalgar in 1805, died here and lies buried in the churchyard.