You are here: Home / About / History / Matting factory in High Street
Main content

In the 19th century, new weaving industries came to this part of Suffolk including silk, horsehair and coconut fibre. They all depended upon imported raw materials and in most cases, processing took place in purpose-built factories. The earliest extant reference to the factory in Bildeston would seem to be dated 1867 when it was described as the ‘brick built and slated building now used as a coco-fibre matting manufactory in Hadleigh Street’ (now addressed as Nos.9a and 9b High Street).

The fibre was taken from husks of coconuts in India and Ceylon (now Sri Lanka) and arrived tightly packed in bales. It was left its natural colour for mats made on special frames in workers’ homes, where the fibres were twisted and then secured to create a pile. Making lengths of matting was heavier work carried on in large workshops or factories. The coconut fibre arrived as yarn, which was then bleached or dyed orange, red, blue or green in large vats. When dry, it was either wound on to bobbins that were placed on creels at the back of looms to form the warp threads or into cops, which were placed into the long shuttles that created the weft. Using iron-framed looms, matting up the 52 yards long (47.5 metres) was woven, finished and then packed up for dispatch to retailers.

In 1839, Frederick Moss was born in Bildeston and lived on the south side of Market Place (now No.5 Chapel Street). Like his older brother and father, Moss was plumber and glazier: probably both boys had been trained by their father John who ran his own plumbing and glazing business. In 1864, Moss married the girl from the grocery and drapery shop next door Elizabeth Osborn, not in Bildeston but at St Mary’s Church, Stepney in Middlesex, with her brother as a witness. The couple returned to Bildeston where, in 1867, they took out a £300 mortgage on property that Elizabeth’s father had left her (now No.79 High Street). It was hoped that from this money, the matting manufactory further down the street would be put on firm financial footing. By 1871, the Mosses were living at Shurlocks (now No.112 High Street) with their four children.

Fifteen men resident in Bideston were working at the factory in 1871: four were general factory hands and eleven were matting weavers, six of whom had come to the village with their families from the Glemsford area, where such production had been set up a few years earlier. In 1874, Moss was employing sixty workers, which suggests a very rapid expansion in production. A fire in the engine house one morning might have proved disastrous to the business if it had gained more headway before discovery by a couple of the workforce. Suggestions were made that a public enquiry should be held concerning the incident but nothing was done officially.

Seventeen other matting manufacturers in south Suffolk were in competition with that at Bildeston and Moss began seeking further financial support, which he found in John Parker, gentleman of Ipswich,. However, only three years later, the partnership of Moss & Parker was dissolved by mutual consent when Moss withdrew completely from the business so that John continued on his own account. In 1880, a meeting of Moss’s creditors held at Ipswich resolved that, with liabilities of £144 3s 9½d and assets of £40, his estate should be wound up in liquidation. Moss and his family of eight children returned to the High-Street house that his wife had inherited. Now, twelve years after business had begun so favourably, he returned to his work as plumber and glazier. The Moss family later moved to Sudbury where he died in 1901 aged 62.

Former partner John Parker did not preside over the business for long. At the start of 1879, he had to prosecute one of his commercial travellers Benjamin Palmer for embezzlement, to which Benjamin pleaded guilty at Ipswich Petty Sessions, where he was sentenced to six weeks imprisonment with hard labour. Towards the end of the year, all the plant, machinery and effects, plus quantities of manufactured stock and materials appeared in local newspaper advertisements for sale. John too had gone into liquidation. The equipment mentioned gives some idea of the processes involved in weaving matting and distributing finished goods to retail outlets. In 1886, John died unmarried at Ipswich aged 53.

Meanwhile, in 1881, the next person to take over manufacturing matting at Bildeston was Frederick Allen, who employed three men and four boys, a considerably smaller workforce than that of Moss in his heyday. At the age of thirteen, Allen had been working as a weaver in one of the five factories at Glemsford, where he was born in 1848. For his marriage certificate when he wedded Elizabeth Chaplin from Norfolk in 1870, he described himself as ‘bachelor of Bildeston, manufacturer’. However, Allen had come to Bildeston to be manager of Moss’ factory: he lived on site and six of the couple’s eventual eleven children were born here. He continued as manager under Parker but when his employer was forced to sell the business, Allen saw the opportunity to put his experience of weaving and his management skills to his own advantage. However, this was only to last for about five years as in 1884, he was back as manager, while Messrs Poynter & Company took over for a brief time. When William Landymore neglected to fulfil his contract with Poynter, Allen was called upon to give evidence at Hadleigh Petty Sessions. As an out-worker, William had received money in advance after agreeing to make fourteen mats; then he disappeared.

Allen remained manager at the factory until 1885, when it finally closed. He took his family to Chatteris in Cambridgeshire, where he was employed at a matting factory firstly as a weaver and then as its foreman. When the High-Street premises were closed, the building was firstly converted into a malt office and then became the meeting place for Bildeston’s Salvation Army Corps.

Coconut fibre mats continued to be made in Bildeston well into the 1890s by men like John Bolton who, as a boy, had been apprenticed as a matting weaver to Frederick Moss. When the factory closed, John made mats at home on his own account, an occupation he continued until his death in 1896 aged 41. 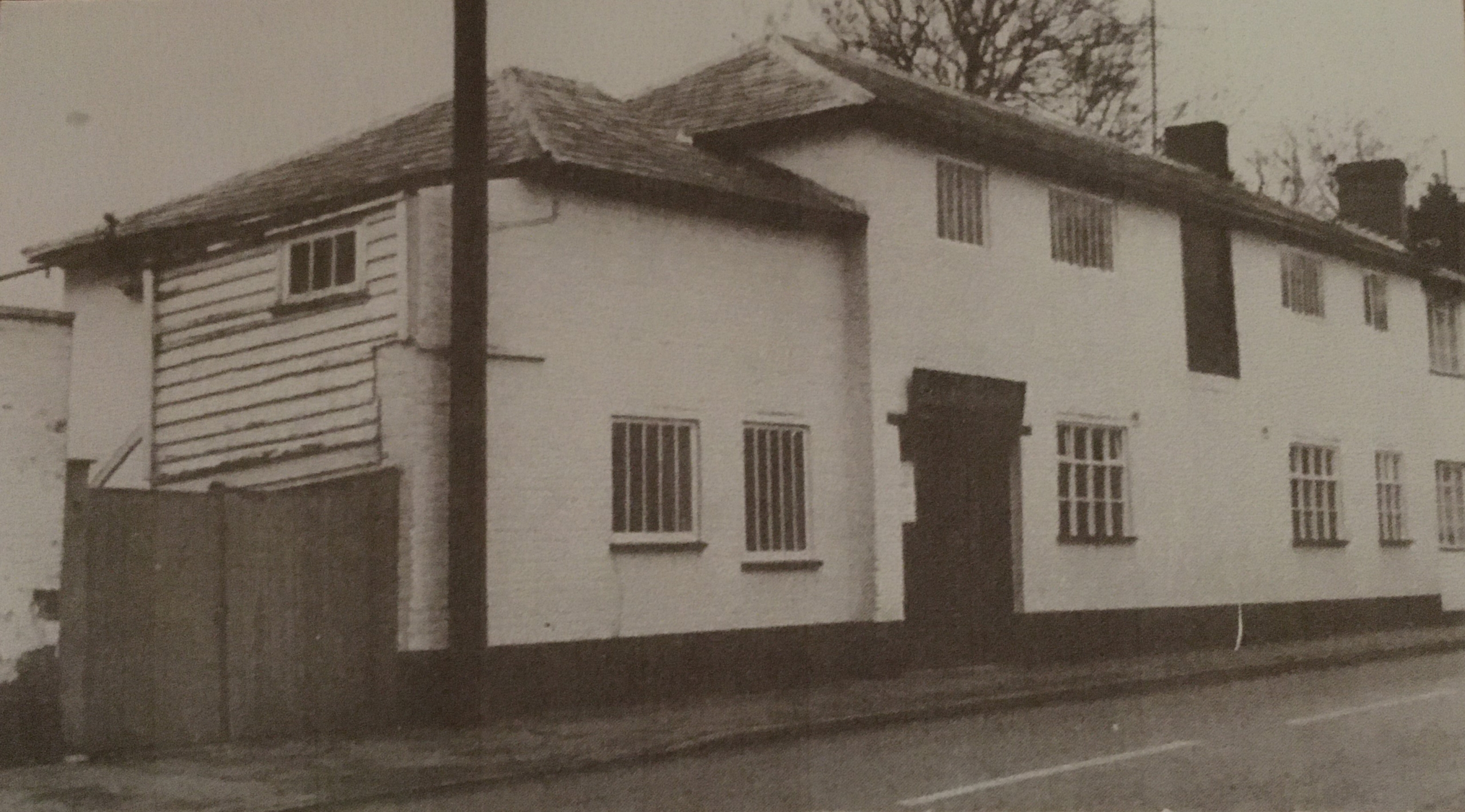 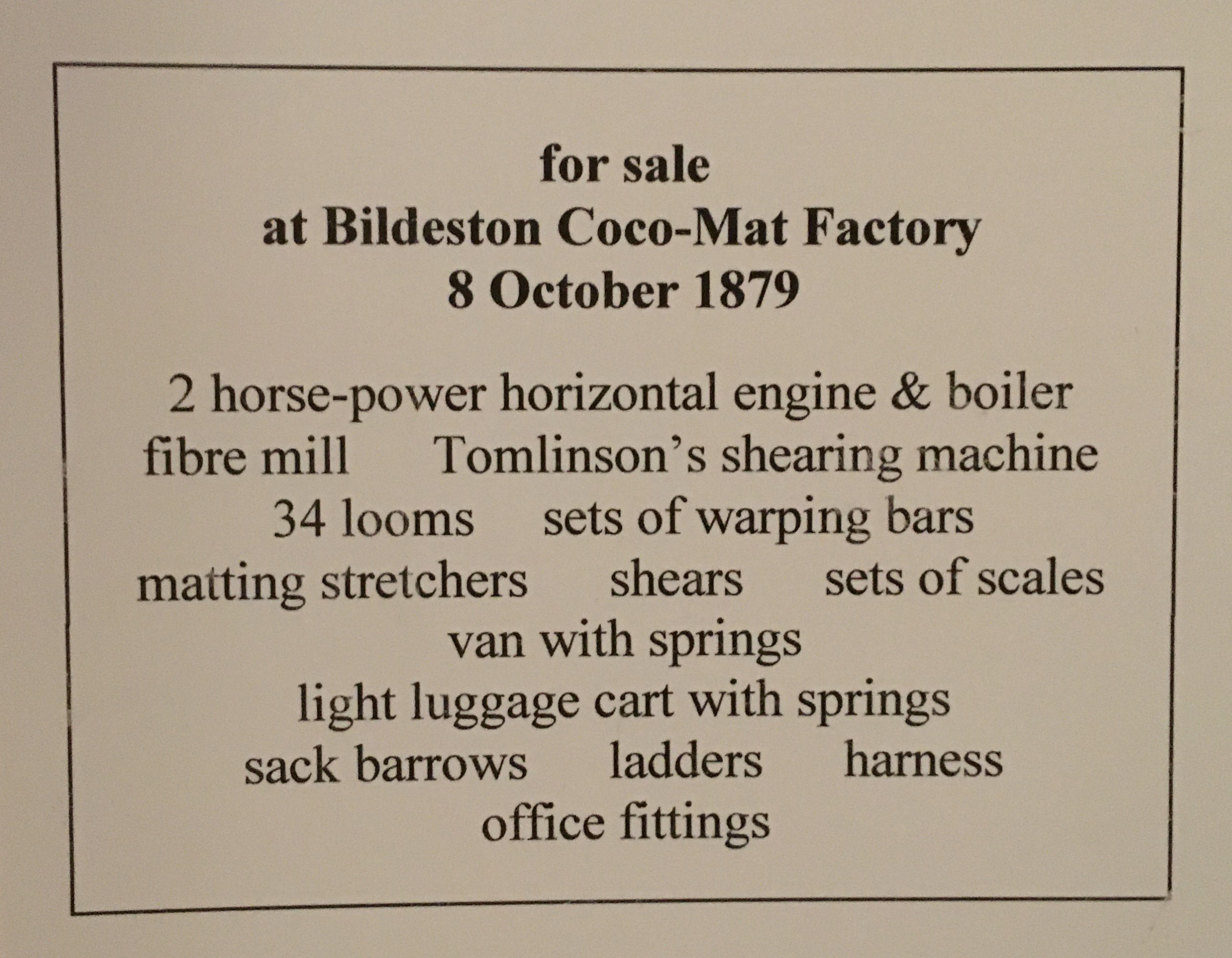 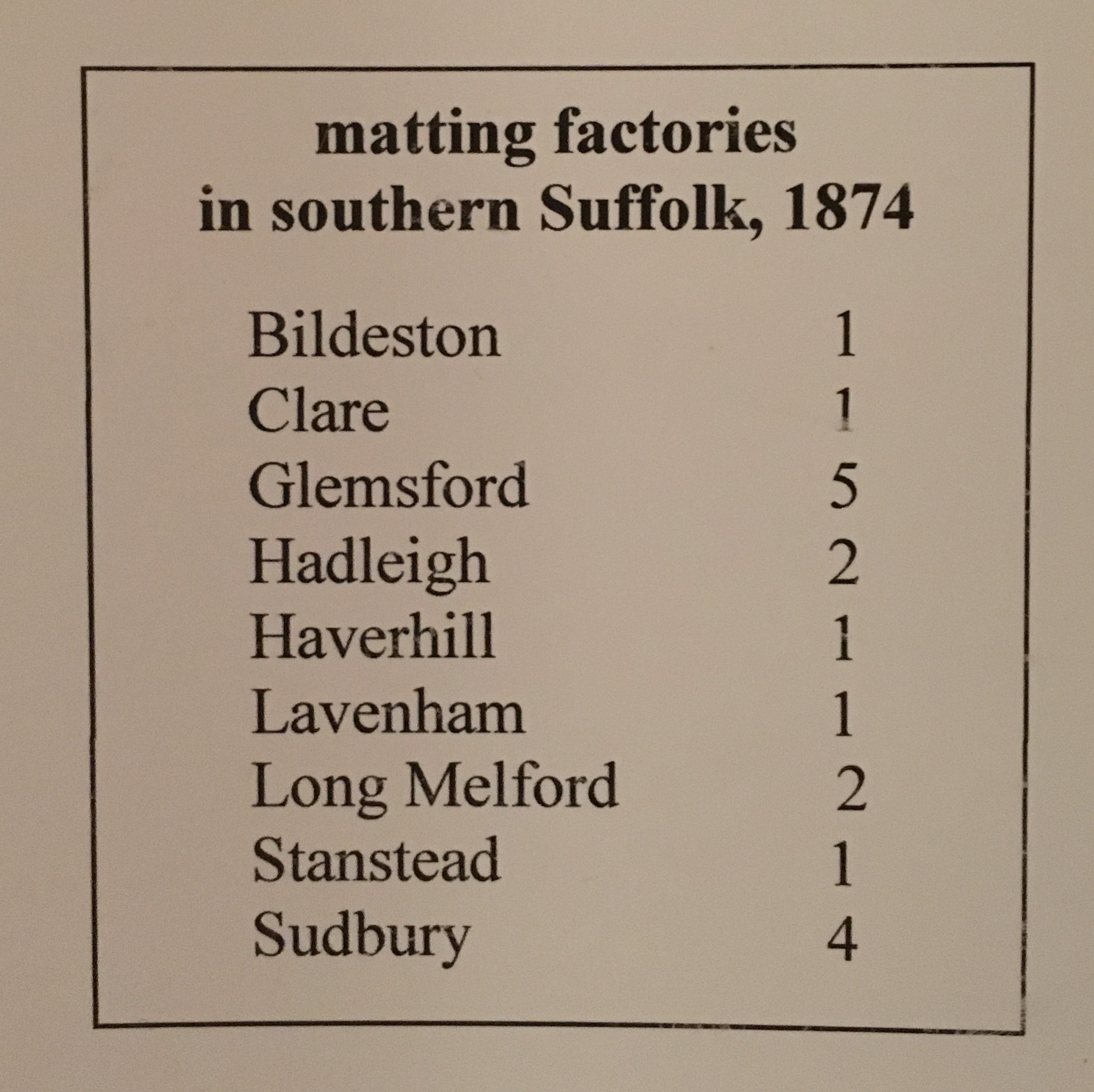